I’ve joined the subreddit r/TIL which is short for Today I Learned (gotta spell these things out for those of us way behind on the texting learning curve).  It never ceases to amaze me, how much I don’t know, despite my many decades of life.  Add Scottish Agate Jewelry to the list of things I learned today.

I stumbled upon an auction containing several agate jewelry items while looking for information on a banded agate “horn” brooch from an odd lot of miscellaneous items I’d purchased.  Apparently, Scottish agate became a favorite of Queen Victoria after visiting and falling in love with Ireland and Scotland during the 1940’s.   Queen Victoria and Prince Albert leased and ultimately purchased Balmoral Castle, located in Royal Deeside, Aberdeenshire, Scotland where they spent many happy summers during the 1850’s.  Following Albert’s death in 1861, Victoria found solace and comfort at Balmoral during her extended period of mourning, staying for as long as four months each year during early summer and autumn.  She continued to visit the castle throughout the remainder of her life; her last visit was three months before her death.  It was also at Balmoral that she met, John Brown, a Scot who tended her horses and became one of her closest companions during her long mourning period (and who was the topic of unsubstantiated rumors of an affair and secret marriage). 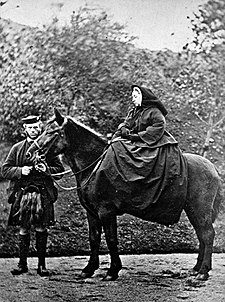 A variety of banded agates, otherwise known as chalcedony quartz, can still be found in Scotland.  Scottish artisans have been using it in jewelry designs for hundreds of years but Queen Victorian brought it to the forefront of must-have fashion in the 1850’s.  It is used in beautiful inlaid designs, most frequently set in solid silver and occasionally gold.  It is often seen in brooches and carved into various shapes and forms (i.e the horn shown above).

Hope you learned a little something extra today.  Thanks for reading!